Indicating "Point of Use"

The newly introduced mirror is labeled with the words "Please check your belongings". for passengers. Turkish Airlines, V Australia and Skymark have placed orders for the mirrors. Because of the print, it helps passengers avoid leaving behind their belonging than before. 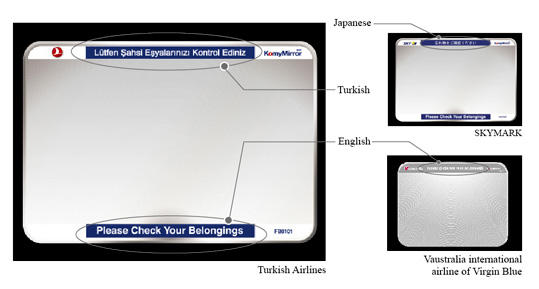 In 1996, during development of the KomyMirror, we mentioned our idea to a friend of ours, and he responded that it was a great idea! He told me that his wife always touched the bottom of overhead bin with her hand to make sure that she did not leave anything behind. His comments encouraged our R&D and gave us confidence to develop this product as a tool for preventing passengers from leave their belongings behind.

In 1998, Japan Airlines selected the KomyMirror for installation on JAL's 100th B747! But we were disappointed when a former classmate and successful businessman a little, Mr. Hirota, who flew on JAL's B747 with KomyMirrors installed to Beijing, told us that passengers did not recognize the purpose of the strange mirror in the bin for what it was.

In 1999, we continued to receive small orders from airlines worldwide, even though passengers were apparently unaware of the purpose. Finally, we learned why Scandinavian Airlines explained that they had installed the KomyMirror mainly for explosive inspections...not intended for passengers! We learned that the KomyMirror was making cabin inspection efficient and shortening the turn-around time of aircraft at the gate.

In 2007, we often heard from passengers and worldwide users that the KomyMirror was "useful and convenient", or that they have avoided losing their keys, but we still believed that many people were unaware of what the KomyMirror is for. We suggested to airlines that text should be added to the FF mirror to indicate its purpose.

In 2008, KomyMirror, with text to remind passengers to "please check your belongings", were installed on Vaustralia and others. Passengers began to recognize the usefulness and function of the KomyMirror.